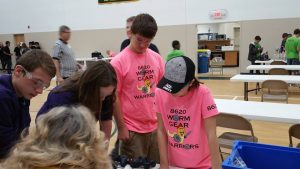 Our first meet of the season occurred at Metro East Lutheran High School, on November 12th. We were pretty successful, but met some challenges during the meet.

The Worm Gear Warriors arrived early to help set up the fields. Robo Raiders, team 7129, also helped us set up. Cap balls were inflated and mats pushed into place. It was time to start competing!

This was a meet, so there was no judging or awards. It’s more of a practice than anything. We were competing against many different teams from the Illinois area. At the competition, our TeleOp was working so that in the beginning, we could attempt to score some starting particles, then, we would press all the beacons. We are still working on a ball loader to be able to get more particles. Our autonomous was supposed to score two beacons and knock the cap ball off the center. After that, there was a chance we could get points for parking on the middle. The autonomous, seemed to be drifting and not pushing the beacons like it was supposed to. After the match, we determined the cause was one of the wheels was malfunctioning. The problem is now fixed for next meet.

Overall, the meet was fun and we met some new teams. It was good practice for talking to other teams and for the drivers to be in some matches.We also got candy and pizza, so, a pretty good day. We are now busy working on the robot and prepping for next meet. Until next meet!